Here we describe a simple, cute DPA attack on the third round output of a Feistel. There are much more advanced attacks that target fourth and even deeper rounds of a Feistel; this attack is on the other hand very simple (just assumes DPA works, no fancy leakage assumptions) and very fun. The full details are in our paper: 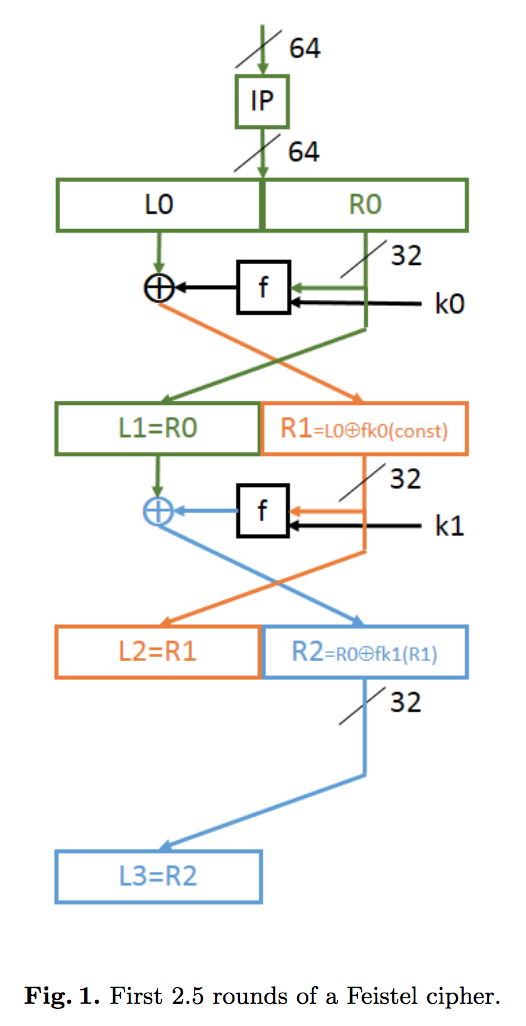 On the left you have the three first rounds of a Feistel. In the case of DES, the 64-bit input is placed into two 32-bit words \((L_0,R_0)\) and then we crank the cipher. In the following, we assume we only get side-channel leakage from \((L_3,R_3)\). This is a good approximation to what happens if the first two rounds are well protected (for example, by masking).

We target leakage from \(L_3\) to recover \(k_1\oplus F_{k_0}(R_0)\). (We’re ignoring the expansion function to make the explanation easier.) Since it is a Feistel, diffusion only affects half of the state per round. So using leakage corresponding to input of round 4 we can recover second round subkey. So far we recovered the second round subkey \(k_1\) plus an unknown offset \(F_{k_0}(R_0)\). We have no idea about this offset \(F_{k_1}(R_0)\). All we know is that it’s a constant.

Proof of concept. We implemented this attack end-to-end. The details are https://eprint.iacr.org/2017/1257.pdf. We exploit leakage only from the third round and perform the simple differential attack yielding just 4 candidates for \(k_0\).